The last three days leading up to Tuesday’s election were completely insane. This ad started hitting the airwaves and completely locked up my youtube pre-roll

Wow. I don’t know what to say about that shit. Wow.

Two days out, I got a visit at 8pm at night from the Faith and Freedom Coalition, explaining to me the evils of the Democratic Party. I told them I had both of what they were offering, and they needed to get off my land.

One day out I probably got hit with more door to door clowns than any day of the election. I got 3 door visits and about 5 flyers.

Cut to the day of. I go to my local starbucks at around 6am (which is usually when I am in there). Filled with Ossoff crew planning the day. Including a guy who ended up coming to my front door to make sure I voted.

We go to our local polling place. Which I should say is a church. Cause those are the only municipal spaces in the state of Georgia. The room that the church let us use has a GIANT cross out in the corner. Its a little ominous when voting. Even Raceland made you vote in a generic municipal space.

We get there, and the poll volunteer comes out and addresses the crowd

“Welcome to your polling place for the Georgia Sixth Congressional District Special Election, as presented by Stephen King. We are going to do this in an orderly fashion.”

It took us about 30 min to be able to cast our vote. Most of the conversation of the people in line were about plans for the weekend. Not really about the vote.

People were in the streets on most of the major intersections.

And at the end of the day…couldn’t pull it through…..

NYT got the best visualizations.

One thing I learned from the data, my particular polling district is way more conservative than I thought 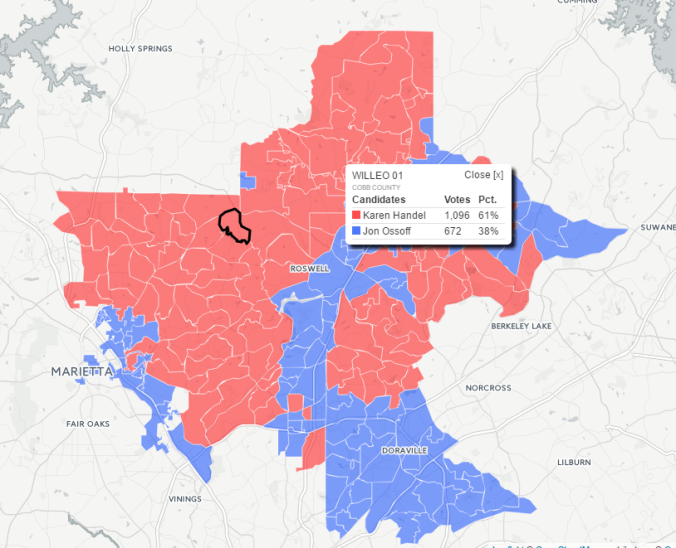 I also thought more people voted out here. Cause for sure more than 2k people live in that area. This made me check it against the 2016 presidential. Handel did worse than Trump by 1 point. Hillary won Cobb by 1 point, but that was due to higher turnout in the other areas of Cobb County that aren’t part of the 6th.

I met a lot of Ossoff supporters who lived near me, but I suppose that is some form of confirmation bias. You talk to the people who you are similar too.

After much sadness and wine, what did I learn from all this.

Well I think I learned a few things.

The sixth was designed for the republicans to never lose it. Hence why the more liberal areas of cobb county are spliced out. And even with that, Ossoff only lost by 2 points, slightly less than 10k votes.

I think that is evidence enough that Georgia is changing. Even my area. Roswell is exploding, and the area is becoming less and less conservative. I think what I said in the previous blog is still correct. I think Georgia is going to change. Its just going to take some time.

With all that being said, I think there is one big takeaway. The sixth is competitive. And whoever has that seat wont get to coast like Price and Gingrich did. The future is coming, and the state is changing. Hopefully, for the better.